Observations about the route At the end of the excursion, there will be picnic areas on the Txindoki slopes where we can eat well. Route description, clothing and material

The Txindoki or Larrunari (1346 m) is located in the natural park of the Sierra de Aralar (between Gipuzkoa and Navarra), and is one of the most emblematic mountains of the historical territory of Gipuzkoa, offering one of the best views of Goiherri Gipuzkoa. At its feet is the hermitage of Nuestra Señora de los Remedios, where the legend says that Mari (a Basque goddess) has one of here residences. Its sharp limestone peak and its edge, emblematic for climbers, rise over the green environment of pastures and deciduous forests. The route from Larraitz is one of the best known and has three variants: via Egurra, Muitze or the base of the ridge.

During the walk, you will cross a pine forest and steep slopes covered with grass. The source of Oria, the fields of Aralar, the txabolas (huts) of Beltzulegi, Muitze Waterfall, Egural Hill and the ravines of Muitze and Urtzabal are some of the places that can be enjoyed during the journey.

The vegetation consists of oaks, beech trees, hawthorn and an endless number of trees typical of the Cantabrian latitudes, without forgetting about any foreign species such as Monterey pine, which give way to pastures as you gain altitude. Boars and deer abound, although they are difficult to see, and even a wolf has been seen. Vultures and crows are the most abundant birds, in addition to other raptors. The surroundings of the Larrunarri are full of megalithic monuments that are testimony to the occupation of these lands since prehistory. The dolmens, menhirs and burial mounds mark Aralar’s fields, a reminder that, in the past, there were inhabitants who survived by hunting and herding.

We advise a minimum physical level and adequate clothing. We recommend that you bring sunscreen, a rain jacket, warm clothing (thermal t-shirt, fleece jacket, feather jacket, gloves, hat), shoes suitable for mountain and bottle for water (the guide will advise you as to which clothes to take, depending on the season) Lunch-picnic: Snacks, chocolates, fruit, soft drinks, etc .

Sorry, the comment form is closed at this time. 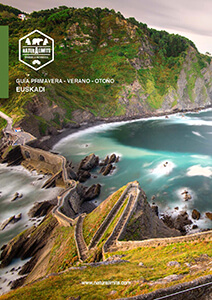